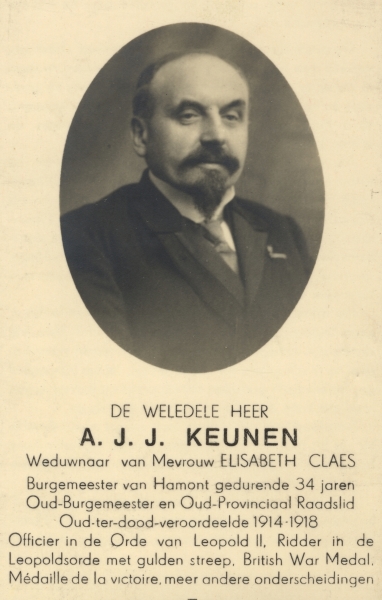 In 1915, the Germans closed off the border between Belgium and the neutral Netherlands with the 'Wire of Death'. Clandestine attempts to scale this high voltage fence were extremely dangerous: if you were not electrocuted, you risked being shot by German border guards. But this did not deter all refugees, or indeed spies, from trying to reach the Netherlands. They were helped by people living on the border, such as Louis Keunen, the mayor of the Limburg border community Hamont. He was also the ringleader of an espionage and resistance network spanning the whole of North Limburg. Arrested by the occupying force on several occasions, he always set free again due to lack of evidence.

The third time round, he was not as lucky. In June 1917, the Germans arrested a woman who had tried unsuccessfully to scale the wire, and during her interrogation, she gave away the names of the people who had helped her. As a result, the Germans were able to round up almost the entire network. Keunen went to Hasselt prison, together with his sister and his two sons. Espionage was punished severely, and on 21 August, the German court sentenced Keunen to death.

His family and other inhabitants of his village immediately set up a campaign to save him. The son of a Dutchman and former manager of a company near Eindhoven, Keunen had some valuable contacts in the neutral Netherlands, and one of his business partners helped his wife Elisabeth Claes to get in touch with the Dutch ambassador in Brussels. He contacted Queen Wilhelmina, who personally urged the Germans to pardon Keunen. And they did! On 6 September, to their great relief, Keunen's family were informed that the German authorities had commuted his sentence to life-long hard labour.

Having endured the harsh living conditions in Werden prison camp in the Ruhr Area, Keunen returned to Hamont after the armistice – exhausted, but alive. He resumed his duties as mayor and carried them out until 1946.