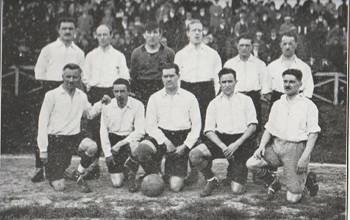 Football was a popular pastime behind the front line. Soldiers would play a game themselves or watch matches played by former and current football stars serving in the ranks at the time. Popular football clubs of the past, such as Royal Antwerp FC and Beerschot VAC, regrouped in the unoccupied parts of Belgium, and teams from different regiments competed against each other. When King Albert I attended such a match, he noticed that the obligatory heavy army boots the soldiers had to wear at all times seriously hampered the game, so he supplied the Belgian army with five hundred pairs of football boots. Other organisations, such as the British Gifts for Belgian Soldiers, also donated sports equipment, and from 1915, the Belgian army's football enthusiasts were able to play with professional equipment. 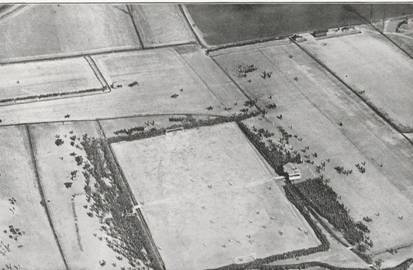 A game of football behind the Yser front - R Antwerp FC 1880 - Club of Pioneers.

Despite the official international matches being cancelled during WWI, a Belgian army team emerged, containing former international players. In 1915, they played their first match against an equivalent French team, whom they saw off 3-0. The Belgian army team quickly became hugely popular in the years that followed. In June of 1917 they played against Italy. After an adventurous 48 hour train ride the Belgian team beat the Italians on their home turf in Milan. Despite starting off the match on the wrong foot they secured a 3-4 victory. 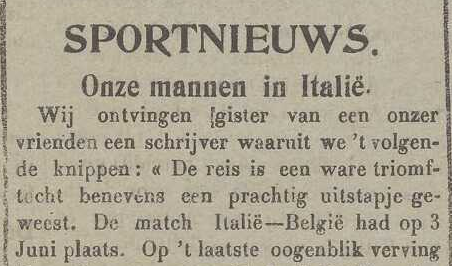 During their Italian tour the Wanderers amazed friend and foe alike by beating both the Italian national team and Modena F.C. - NvdGO, De Belgische Standaard 20/06/1917, p.2.

Having become famous as the Belgian Front Wanderers, the team toured Great Britain in 1917, where they played against British and Canadian army teams in the large stadiums of all the major English cities. The tour was a great success, and the Belgian team's popularity in Great Britain seemed to know no bounds. As a result, the Front Wanderers were again invited by the British in 1918. 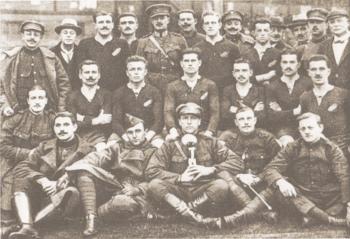 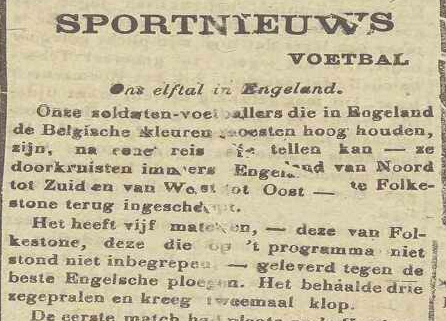 The Front Wanderers also entertained the troops at home, and on 6 june1918 in the unoccupied Belgian town of Roesbrugge, they 'obliterated the English 13-2, to the great amusement of the thousands of squaddies present', according to the newspaper Het Vaderland (The Fatherland).

Newspaper article of Belgium's victory against France in April 1918. Their eleventh victory against the French in thirteen matches since 1906 secured the Wanderers the coveted King's Cup. - NvdGO, Het Vaderland 22/04/1918, p.1

The experience the Belgian players gained in the international football circuit in this way came in handy during their further careers, and laid the foundation for the success of Belgian football after the war. In 1920, the Belgian team even won an Olympic medal at the Beerschot stadium in Antwerp.

By courtesy of Club Brugge and R Antwerp FC 1880 – Club of Pioneers. 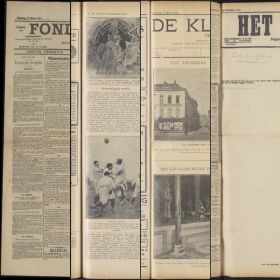 Football during the war