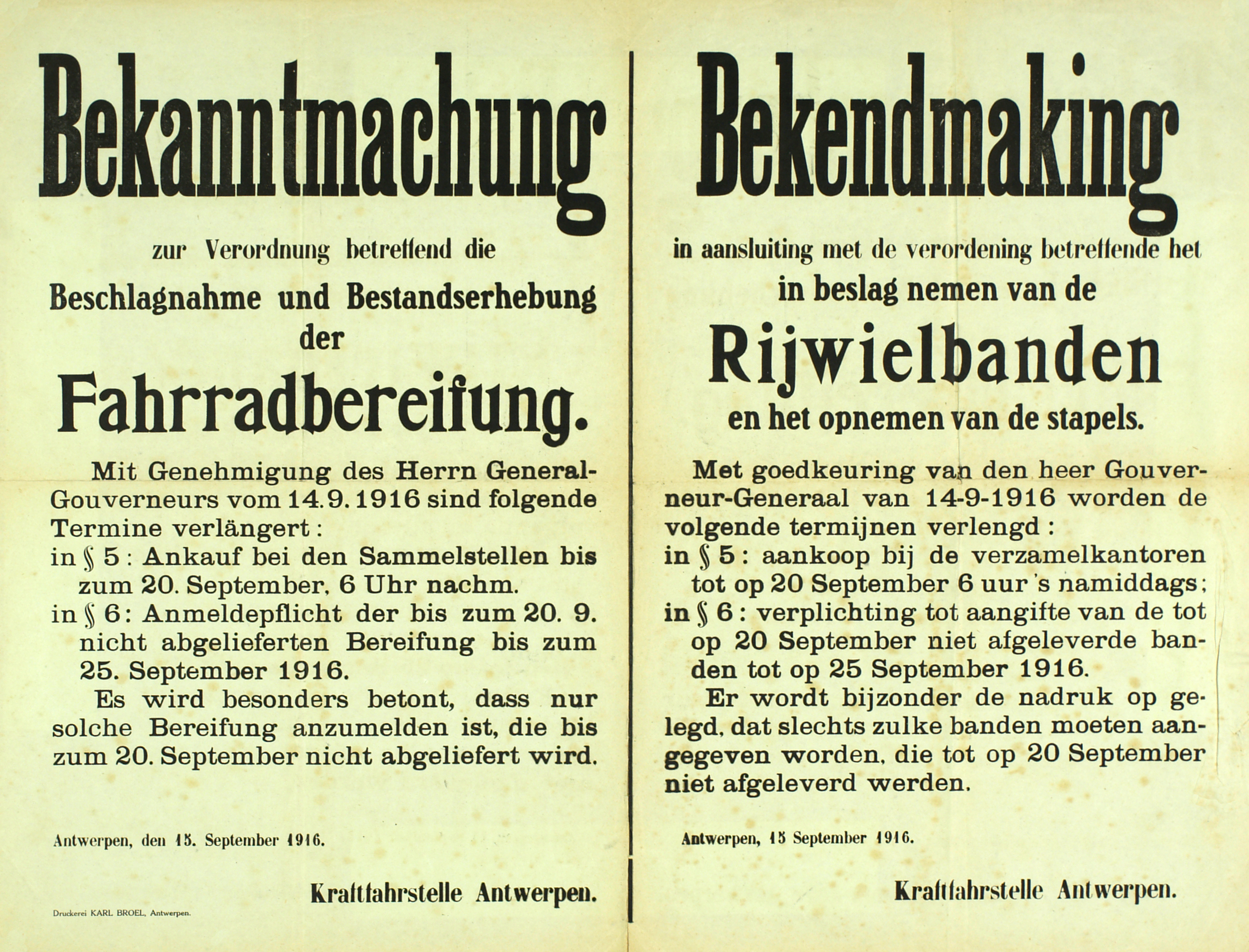 The German occupier ruled in occupied territory by means of countless Verordnungen and Bekanntmachungen. Public life was regulated by thousands of big and small regulations that changed continually. Many of these regulations were felt to be harassment by the population, but from the standpoint of German, military logic they were mostly very explainable.

The German regulations were intended to preserve peace and order in occupied territory. The Germans did, after all, wish to direct as much attention as possible to the conduct of the war. Moreover, a peaceful occupied area ensured that more men could be sent to the front, and fewer soldiers had to be deployed in the rear areas. Additionally, German military command wished to exploit the occupied area as much as possible. Raw materials and other items that could be used at the front, or which the occupying troops needed, were requisitioned from the population. These requisitions helped to bring about an impoverishment of the population.

The ordinances covered almost all areas of public life. First of all, the occupier wished to maintain control of the population. No one could proceed to another municipality without being in possession of an identity card. Anyone that wished to leave a given area, therefore had to apply for a Passierschein. One could not obtain a Schein without a good reason and a substantial payment. In order to prevent young men from fleeing to the Netherlands and travelling via Great Britain to join up with the Belgian army, they had to present themselves to the Kommandantur, or the town hall, each month. All possible signs of resistance were immediately crushed. The singing of songs, the Belgian tricolour and gatherings were all forbidden. Cafés had a set closing time and often alcohol was not allowed to be served. The fear of spying also led to strict rules about communication: pigeons that could carry messages were not allowed to fly, and the post was censored.

The countless regulations differed from area to area and were continually changed and added to.

All ordinances were published in the Verordnungsblatt – a kind of replacement for the Belgisch Staatsblad, or Belgian Official Gazette - and hung up in public places, such as the church, the town hall or the police station. The mayor was responsible for notification of the new laws and regulations in his municipality. Together with the police, he also had to ensure that they were complied with. The German Feldgendarmerie monitored both the citizens and the mayor, and could impose sanctions if regulations were not followed.

At a local level, the regulations were often applied in a very ad hoc manner. The local commandant could then immediately respond to difficulties in his municipality. Quite a few citizens resisted the regulations or disregarded them. For example, raw materials and other items that were to be requisitioned disappeared onto the black market, or were secretly withheld. Breaches could be punished with a fine or imprisonment, but often resulted in yet more regulations, which were again opposed, as a result of which new regulations were again drawn up. The German' issuing of regulations was thus often a system of action and reaction.