Even before the war, Belgium depended on imports for its food supply. When those dried up during the war, food shortage quickly became a serious issue. While initiatives such as the Nationaal Hulp- en Voedingscomité (National Relief and Food Committee) helped to alleviate the problem, they did not solve it completely. Food, as well as other things like fuel for heating, remained very scarce in Belgium.

In response, the occupying force tried to organise the provisioning of the population more efficiently. With the introduction of bread rations in November 1914 and the rationing of many more products in the following months, they distributed the most important foodstuffs and fuel among the citizens in fixed amounts. The official rations were barely enough for survival, however. 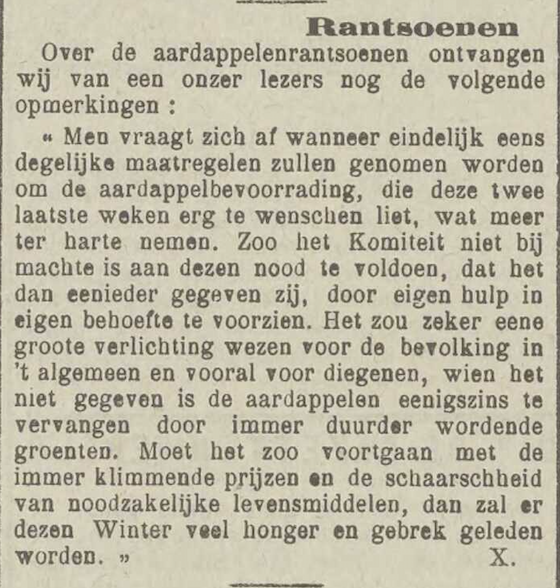 As increasing scarcity drove up prices, the Germans tried to regulate them by determining maximum prices for many products. But this remedy did nothing to solve the problem of rising prices, as it did not address its cause: the food shortage. Those who could afford to, bought more than their share, and demand soon exceeded supply. As a result, many products were not sold from the shelves of the official shops but traded illegally on the black market for a multiple of their value.

The black market involved many layers of society. The buyers were predominantly wealthy city-dweller, the middle men unemployed workers or the ruined middle class. But the farmers were the ones to profit most from the black market. By August 1918, the average price of black market products was fifteen times higher than at the beginning of the war! During the same period, savings in agricultural banks increased tenfold. Despite efforts to take action against all forms of black market trade, the occupying force never managed to curb it. The ration and the black market