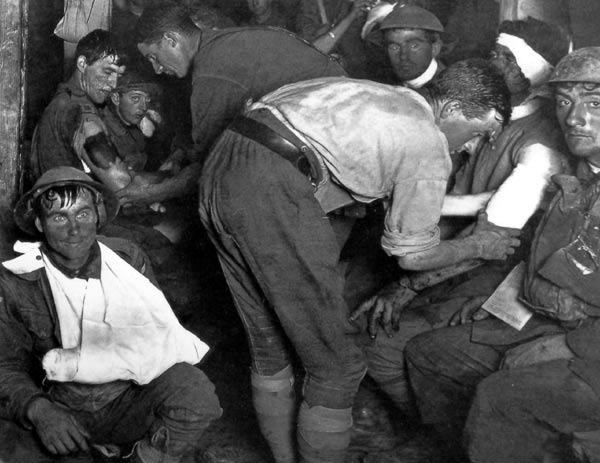 The hardship, continuous fear and the powerlessness of the individual made life in the trenches a physically, but above all psychologically, horrifying experience. Though not visibly injured, many soldiers suffered nervous breakdowns and were no longer able to function. The British army counted 80,000 cases of shell shock by the end of the war.

In the first war years, those men were simply dismissed as cowards who feigned their symptoms as a way of escaping the front. Shell shock was only recognised as a medical disorder in 1916, and there was as yet little consensus about its treatment. Some doctors devoted themselves to setting up specialised medical centres behind the frontlines and in Great Britain, where shell shock was treated with hypnosis, or, like hysteria, with electric shocks and cold baths. However, the army command considered soldiers in such psychiatric institutions a 'waste' of manpower, and as a result it became increasingly common for soldiers suffering from shell shock not to be evacuated. They were given a day or two of rest, a square meal and a clean uniform before being sent back to the front. If the symptoms of shell shock persisted for too long, it was generally blamed on the soldier's weak constitution, not the war. The army command felt soldiers should not be 'rewarded' for having nervous breakdowns. They received neither a medal nor a pension. Only if the breakdown was clearly the result of an explosion was the soldier granted war casualty status. The army command continued to struggle with the concept that shell shock could exist without physical injury.