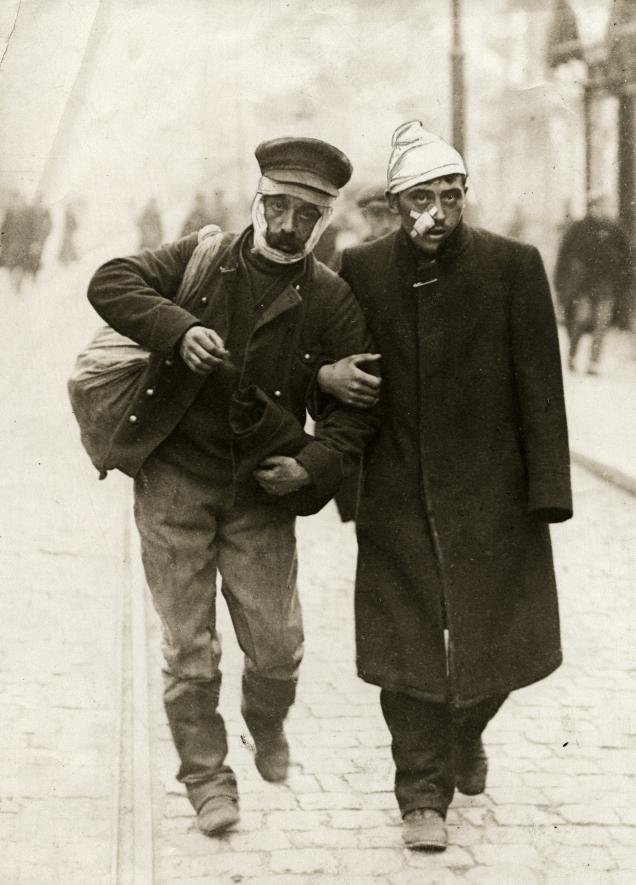 The industrial nature of the First World War resulted in an unprecedented number of casualties, making effective medical organisation necessary. While a great many wounded soldiers died before reaching the field hospitals and others were sent back to the front after treatment, a third group of casualties proved no longer suited for military service, as they had lost one or several limbs or had been blinded by stray shrapnel.

What was to be done with these soldiers? In the first months of the war, crippled Belgian soldiers were given 'paid leave'  - and having received this financial compensation, were left mainly to fend for themselves. Many were unable to return home, as a large part of Belgium was in the hands of the Germans. Some were looked after in Dutch hospitals, others went to work, injuries permitting, in British ammunition and other factories. Many drifted around aimlessly. As far afield as beach resorts in southern France, the mutilated Belgian soldiers were a stark reminder of the heavy human toll the war was taking. Their presence was not exactly a boost to the war morale of the local population. Realising this, the army commanders recognised the need for a more permanent solution. Perhaps the war invalids had been dismissed from military service prematurely  ̶  some might still be able to mend uniforms or dig ditches.

The army commanders also had to consider the future. The war was a drain on the available labour resources in Belgium, too; once it would be over, the country would need all the help it could get to rebuild its cities and farm the land. With this philosophy in mind, specialised centres were set up. In such, mainly French, 're-education homes', mutilated soldiers were fitted with prostheses and given special lessons. The men were trained as farmers, construction workers or gardeners. With the task of resurrecting post-war Flanders ahead of them, the former military rejects had become the hope of the future.